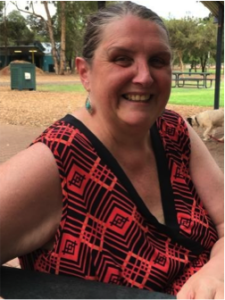 Hi.  My name is Deborah Jacobs and I am the founder and head practitioner of Holistic Haven Australia currently located in Adelaide. I am a Counsellor and Sex Therapist specialising in grief, loss and suicide bereavement.

Over the past decade I have gained specialised training and experience in suicide prevention, intervention and postvention, as a volunteer Lifeline telephone counsellor, then as a first responder with Living Beyond Suicide – a program of Anglicare SA, which commenced in 2008. More recently I have also become involved as a volunteer with the Playford Suicide Prevention Network and help out at the Playford Suicide Bereavement Support Group in Elizabeth each month.

I have a wealth of experience in the disability arena and have come to realise the need to look at everyone as an individual and see that their issues are dealt with in the most holistic manner possible. During my years as carer to my son Brendan, I was heavily involved with a variety of disability organisations.

Following my son Brendan’s death in 2004, and several hospital stays for hernia and other operations, I realised how many people had their own stories of grief and loss which were still very raw even decades later in some cases. For some it was the loss of a loved one, but for others it was dealing with their loss of good health that they were grieving. It was at that time I decided to study counselling so that I would be qualified to help such people. This also fitted in well with the holistic health approach and my training as a reflexologist and massage therapist, which I completed while seeking the right Counselling-training organisation.

Always interested in writing, I worked as a reporter and editor at two community newspapers in Sydney, and had several articles published in various newsletters and parent magazines before turning my attention to this project. Coincidentally, recent and serious health challenges have called for some lifestyle changes that make writing a good field for me to once again focus my energy.